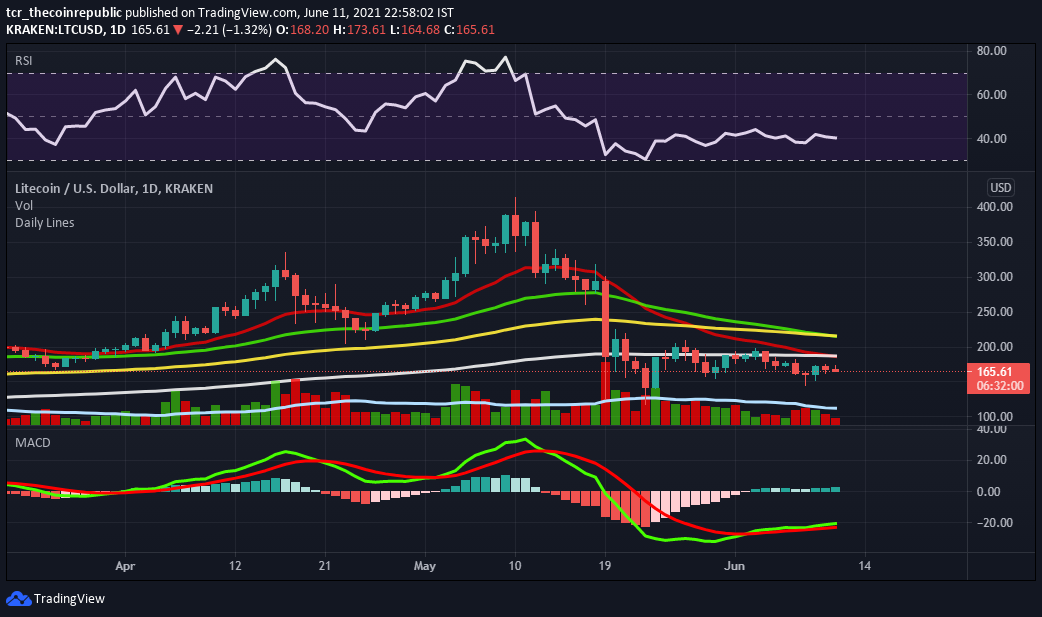 In a weekly time frame chart, the LTC coin was having a downtrend backed up by below-average volume, starting around December 2020. Though the price was going higher and higher, RSI was in a completely different mood. Looking at the RSI there was clear divergence present, this represents a weakness in price and an early indication of price fall, which happened. As of now, the price has breached the support trendline and the 200-DMA which was acting as a good support line since the uptrend started

If we get this week closing below the trendline, we can say the sideways trend is over and the price can move higher from here.

The daily technical chart of the LTC token shows, after the huge fall, the price gave a closing below the important support level of 200-DMA and also below the trendline. Thursday’s price tried to go above to see if this level now gives resistance to it, this behavior in technical term is called retest will the retest was passed and the price failed to go higher, also as today’s candle is slightly bearish, so this could be a good opportunity for traders to sell. Currently, the price is trading below the 200-DMA which was providing a good rejection line for the LTC coin when it was in a downtrend, though it has not breached the 200EMA doing so will add more fuel for Bulls.

Conclusion- Litecoin has shown favorable price action for the price to go lower, So for now traders use 20-30% of the capital to buy this now, later if the price moves above 200EMA and traditional pivot level(R1), we get more confirmation and buy the remaining desired qty for the first target of $220.

Mr. Pratik chadhokar is an Indian Equity, Forex, Cryptocurrencies and Financial Market Advisor and analyst with a background in IT and Financial market Strategist. He specialises in market strategies and technical analysis and has spent over a year as a financial markets contributor and observer.