WazirX served a show-cause notice by ED for high transactions

Show Cause notice to WazirX created panic among investors

WazirX is one of India’s most trusted crypto assets exchange platforms. However, on Friday, the Indian Ministry of Finance’s Enforcement Directorate (ED) issued a Show-Cause notice to the exchange. The ED believes that the exchange has breached the Indian Foreign Exchange Management Act (FEMA).

Since the notice was issued, investors of the WazirX native cryptocurrency WRX began to sell off in a panic. Indeed, since issuance, the price of WRX has plunged heavily. Moreover, the downtrend is continuing.

According to the law enforcement body, WazirX seems to have been used by the Chinese nationals to launder gambling proceeds. The ED also mentioned that using the exchange’s platform Rs. 57,00,00,000 ($77,97,047.10 approx) worth gambling proceeds has been laundered.

Additionally, the enforcement body stated that the fund was deposited in Indian currency to Tether. And based on instructions received from foreign, the Tether stablecoins were transferred to a Binance Wallet.

On the other hand, the users of the leading Indian exchange received cryptos worth Rs. 880 crore ($12,03,49,240.00 approx) from the Binance accounts and transferred virtual currencies worth Rs.1400 crore ($19,14,63,580.00 approx) to such accounts. Notably, one of such transactions is available on the blockchain for audit or inspection as per the ED.

According to India’s ED, WazirX has never collected a requisite document in clear violation of the basic mandatory precaution norms. Such norms include Anti-Money Laundering (AML) and Combating of Financing of Terrorism (CFT). Moreover, the enforcement authority also claimed that the exchange was not following the FEMA guidelines.

Following the WazirX’s, users are allowed to transfer digital assets irrespective of location and nationality. Hence, the transfers consist of improper documentation, making a safe scenario for money launderers and bad actors.

Following the scenario, WazirX CEO highlighted in a tweet that it had not received the show cause notice at press time. Explaining the claims, the exchange denied all the non-compliance from the firm. WazirX stated that the exchange complies with all applicable laws.

Simultaneously, Nischal Shetty, the CEO of WazirX, says their platform exceeds their legal commitments by following Know Your Customer (KYC) and AML processes. Moreover, the platform has always provided information to law enforcement authorities whenever required. Shetty also claimed that the exchange could trace all users on its platform with official identity information.

WazirX is also ready to cooperate with the law enforcement body of India for further investigation.

The claims from the Indian Enforcement Directorate generated fear among the users of the platform. Several investors were observed exiting the market due to panic. Also, many have removed the WRX tokens from their digital portfolio.

According to the data from TradingView, since the tweet of the ED was published, the price of the tokens continued to plunge. Notably, within an hour, the digital currency lost approximately more than 18% of its price value. Over the last seven days, the token is down by more than 10%. Whereas,  Selling volume is also jumped above the average line with a sharp decline. 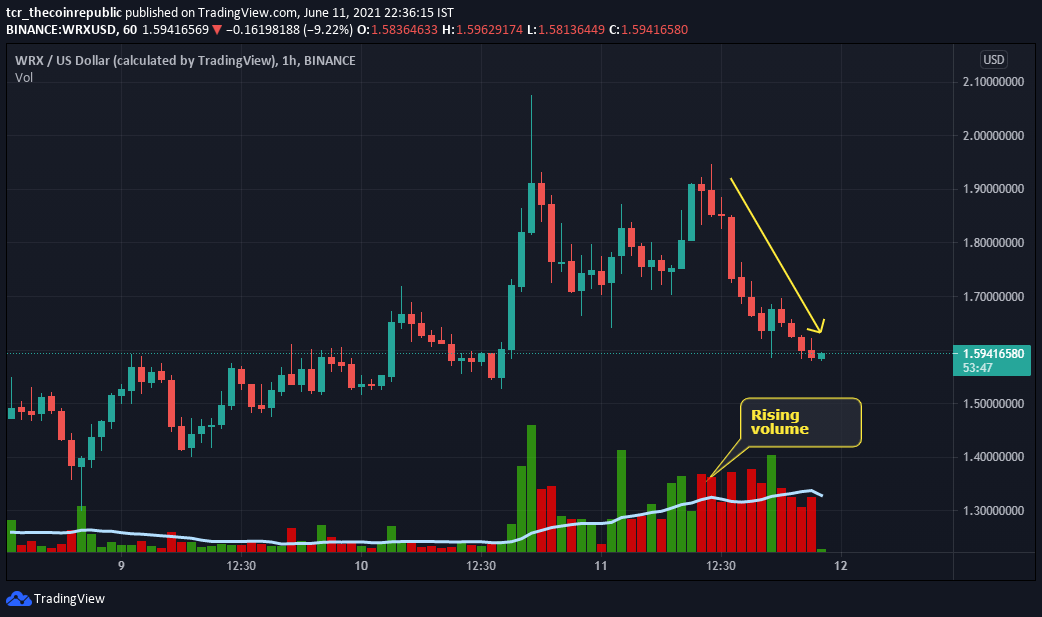 Mr. Pratik chadhokar is an Indian Equity, Forex, Cryptocurrencies and Financial Market Advisor and analyst with a background in IT and Financial market Strategist. He specialises in market strategies and technical analysis and has spent over a year as a financial markets contributor and observer.