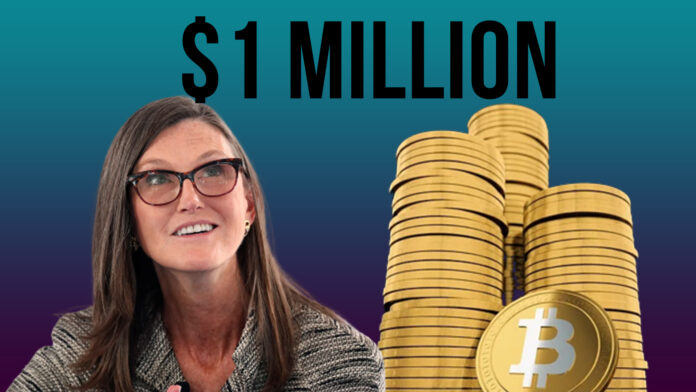 Cathie Wood forecasts the $1 million mark for Bitcoin: What does this mean?

Founder CEO of Ark Invest, Cathie Wood, seems to be going all bullish on Bitcoin and Ether; she firmly believes that the major cryptocurrency BTC is supposed to touch the $1 million mark by 2030. A very far cry from today’s price of $16,411.

Cathie is seemingly unfazed by the price crash at Grayscale’s Bitcoin Trust (GBTC). Amidst the price drop and discounts, her company recently purchased 176,945 shares, Which is approximately $1.5 million. Ark Invest already had a massive portfolio dedicated to shares of GBTC, with around 5.9 million shares in total, almost 0.4% of the total shares in the market.

GBTC is the largest bitcoin fund in the world and manages over 635,000 BTC; at today’s rate, the valuation equals more than $10.4 billion.

The recent FTX saga has caused the interest of many investors in the market to shudder. Very optimistic leaders of the crypto world believe it will take a long time for the market to regain its glory, while some do not believe anything like this is happening.

Wood firmly reiterated her forecast of BTC reaching the $1 million mark in a Bloomberg interview; she believes that such setbacks are necessary at some point in time, and they help us identify the real value of the projects.

“Sometimes you need to go through a crisis to see the survivors, Bitcoin is coming out of this smelling like a rose.”

According to Wood, the major minus factor of this ongoing situation is the loss of investors’ interest and belief in the market. She thinks people will see and realize the merits of beloved cryptocurrency and embrace it with open arms. The fervor will soon return to the BTC in a couple of years, and when it does, the entity can touch the $1 million mark.

She is bullish about BTC and ETH and believes that the latter will be subjected to mass institutional adoption in the years to come.

Thanks to cryptowinter and Genesis and the FTX collapse, the shares of GBTC have dropped considerably, currently trading with a 27% decline compared to last month at $8.40. Currently, their shares are trading at a 42.7% discount against the spot BTC price. The trust set a record for the highest discount at 45%. A week ago, Ark Invest bought 273 thousand shares.

The market needs the support and belief of such leaders; this will help users again trust the system, and the crypto market to its better days are still ahead.