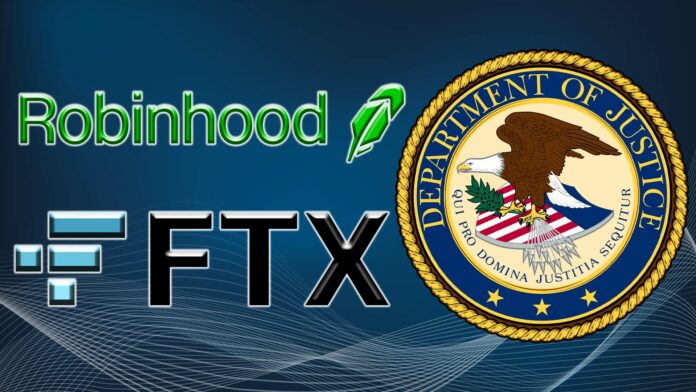 Samuel Bankman-Fried investment cobweb in 2022, where he buys stakes in many crypto platforms and exchanges. Robinhood was one of his major stakes, where he bears 7.6% of the company stakes—which is $648 million, & SBF alone secured a total of 56 million shares worth roughly $465 million in the deal, using funds borrowed from Alameda Research.

On 4 January 2023, Reuters reported that US Attorney Seth Shapiro had informed the U.S. Bankruptcy judge John Dorsey, overseeing the FTX bankruptcy case, that they were seizing 56 million shares of Robinhood—$465 million. This occurred after the judge ordered SBF not to access or transfer any crypto asset from FTX or Alameda Research.

Just before the collapse of FTX, SBF pleaded with those shares again to get another loan. That means he broke the agreement and defaulted on the collateral. Consequently, blockFi gave an ultimatum to SBF to surrender collateral to them

The US authorities decided to seize or in the process of seizing, $465 million worth of the exchange’s shares, linked to FTX.

James Bromley, an attorney for FTX, told Dorsey that none of the seizure assets are currently in the direct control of FTX in Chapter 11.

In November, SBF denied moving funds from Alameda research, saying that he  no longer had access to the wallets since stepping down as CEO.

On 3 January 2023, SBF pleaded “not guilty” to all eight charges, including wire fraud and money laundering—connected with the FTX collapse, which carries a total of 115 years of prison for him if he is convicted.

Since December, from a court order—the so-called “crypto king” has stayed under house arrest at his parent’s residence in Palo Alto, California. And required to wear an electronic monitoring bracelet on his ankle. He needs to show up for court in New york—his trial date has been set for 2 October 2023.

The two executives of the FTX, Gary Wang, co-founder of FTX and Caroline Ellison, former CEO of Alameda Research, pleaded guilty to federal fraud charges for their role in the collapse of crypto exchange FTX.

Now it willl be interesting to see as to who gets to acquire control over them, BlockFi, SBF, or someone else.